Last Saturday, David and I did one of the days of the 5 Days / 500 Miles through Spearman Expeditions.  It was my first 100 mile ride.  I followed a training plan that I had found on line and rode more bike miles than I ever had in my life during those months!

I wasn't sure, when we got up, if we would be able to ride or not.  There was a noisy thunderstorm that had moved through around 2am and sort of stuck around.  By the time we got to the starting site, the rain had died down and it was cool and just a little windy. 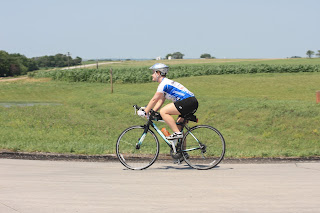 The first 30 miles was under an overcast sky with just a few little rain drops here and there.  There was a pretty good head wind as we headed south, but nothing that we're not used to here in Nebraska! Even though we had ridden much further in training, those last 10 miles before the stop seemed quite long.  Though, I've learned that there is a point where your body succumbs and things take a turn for the better! First SAG stop in Firth.

A gentleman noticed my Sheclismo team jersey and asked how Sydney was doing. Sorry, I didn't catch his name - but I told him that she was still kicking ass, as usual! :)  I also had another person recognize me from the article that I was in in the Omaha World Herald.  Talk about feeling like a rock star!  What a couple of great pieces of encouragement!

As we headed out from Firth, we noticed the clouds looking angrier but pedaled on.  There were two riders in front of us and pretty soon one of them turned around!  We wondered if he had mechanical issues...but it seems he just had better radar to look at...because a few miles down the road, it started to pour rain.

For five miles we got pelted with rain so hard it stung our cheeks.  We soon lost sight of the second rider in front of us, but never saw her in distress.  We saw her later and she had taken shelter behind a building.  The rain was coming in sideways and the wind was horrific.  I prayed a lot.  I tried to just keep sight of David in front of me and not get blown off the bike.  I felt doubtful that I would be able to carry on much longer, and then it stopped. 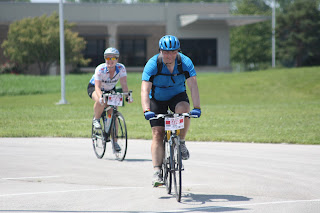 When we stopped for a train, another couple caught up to us.  We rode the last 10 miles to the lunch stop with them, chatting and pedaling.  Mark and Laurie were really cool - they have 5 kids and were riding all 5 days of 100 miles each, one for each child!  Totally AWESOME!!


The next stop was at about 60 miles in Filley, Nebraska. We were both totally soaked, and it was a good time to sort of re-group.  Knowing there was a chance of rain, I had brought a change of socks...I know I was thinking like a runner, but wet socks = disaster in my world.

After lunch, we headed toward Beatrice and God turned up the wind and brought out the sun!  It was sort of like riding in a clothes dryer.  But who's afraid of a little wind, right?  I admit, I was cussing a little by that time.  Really, with the wind...REALLY??  We dried out quickly and by the time we headed north, the wind was SSE and was more of a cross wind than a head wind. 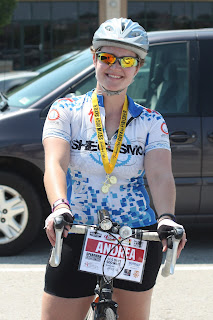 In Beatrice I took a little tumble when I couldn't stop soon enough on a narrow passage.  David warned me, but I just couldn't stop soon enough and ran into him, dumping my bike a little to the side.  My right knee and elbow took a small hit.  Another rider came up behind us and led us through Beatrice on some less traveled streets.  Outside of Beatrice about 5 miles from the last SAG stop, I blew a tire.  My husband is the best at changing tires - I rarely get practice.  However - I did spend one afternoon a while back taking off tubes and tires to teach myself how to do it.  After all, I am a Woman Taking the Wheels!

We stopped in Cortland long enough for a refill of water and a pit stop.  The folks at the SAG stops were so fantastic.  They were encouraging, and positive, I really felt like they wanted to see us succeed.  The last 15 miles were really tough physically, but easier mentally because we knew we were on our way home!  I have to say, this ride was harder than I thought it would be.  Our total ride time was 7 hours, but with all the stops it took a bit over 8 hours to get back to the start.  My bike computer registered 107 miles.

At the end, we were presented with beautiful medals by the race coordinator, Stephanie.  It was such a good feeling to do our first 100 mile ride.  Three months ago, I couldn't have done this ride.  But, I trained for it and completed the challenge.  Wearing my team jersey helped me to identify myself with success.  My fellow Sheclismas are strong, capable women, and each time I ride I feel like I am to!

Here's to many more miles!