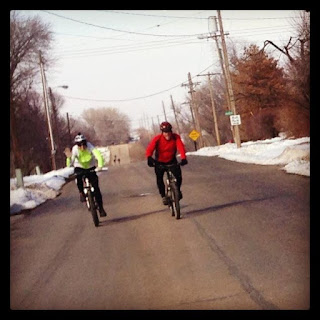 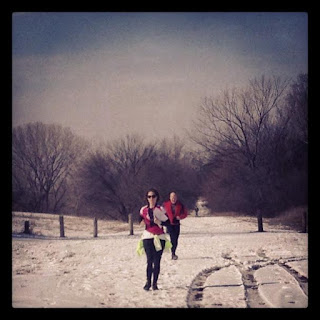 Our Adventure Racers have kicked off their season with a snowy bang, with new Sheclismas Crystal and Jill racing on a 3 person co-ed team and placing 2nd overall in the Panama Winter Challenge. Ashley and Tina were the only 2-person female team on course, and hold the awesome distinction of clearing all 14 checkpoints!

Ashley, who is in her 2nd year of adventure racing, said Sunday's racers faced 3 miles of running in the snow and 15 miles of wet, soft gravel on their bikes.

Crystal has video from the event -- you can see her helmet cam in the photo Jill took above -- but basically sums it up by saying the video is full of her saying "Damn hill."
Adventure Racing is a great team sport that cyclists can enjoy.  It typically involves trekking, map reading, cycling, and can include paddling, repelling, and obstacles.  The team stays together the entire time. Events can be as short as 2 hours or as long as a week.  The majority of races last 12 hours or less.
Posted by elisabeth at 9:54 PM No comments:

Join Sydney Brown with members of Sheclismo & Greenstreet for a group road skills clinic/ride on Sunday 3/17. Women only, please.

The history of women's emancipation and the development of the bicycle are deeply intertwined, yet ridership among women has yet to reach levels reflective of women's share of the population. Instead of the long post I could write about this, though, here are two excellent media pieces instead.

First, Glitter Gravel has a great set of guidelines -- for men, for women, for bike shops, and for the industry -- about how to truly embrace and engage new women riders. Read it, reflect on it, share it, and then act upon it!

Then, Streetfilms put together a nice set of interviews from last week's League of American Bicyclists Women Bike Summit in D.C., set to wonderful footage of women of all ages riding in cities all over the country. Things are changing. We're happy to be working hard to be part of that.

Posted by elisabeth at 7:55 PM No comments:

If you didn't make it to the Sheclismo Herstory Hustle, you missed out on some fun SHEnanigans. The Herstory Hustle was inspired by last year's Girly Hustle but with a focus decidedly more important: Women's History! Pepe was gracious enough to let us start the hustle at his restaurant: Pepe's Veggie-Mex Bistro where hustlers could find nourishment (they were going to need it). Hustlers were supposed to come prepared with their own barbie or doll of some sort.  Upon arrival at Pepe's,  hustlers were directed to a table of supplies where they had to adorn their dolls with necessary items for the expression of their "Inner Divas."  At 8pm they were on their way to the first checkpoint.


At each checkpoint a different activity was waiting including 'Butch Bingo' (a game centered on hustler's knowledge of the LGBT community and equal rights),  bra burning, a visit to the Pain Cave and a Women's Herstory quiz.

In the Pain Cave, participants hopped on a bicycle and trainer for a much dreaded hill climb as Sydney pushed them to their limits. "Aunt Flo" (aka, Gina) was on stand-by administering a shot glass full of boozy inconvenience as she saw fit.

The Women's Herstory quiz was prepared by the lovely Diane.  This quiz was 2 full pages of multiple choice and short answer questions. The questions were not easy.  The best score of the night was 18 out of 25.

Upon arrival at the end point (O'Roarke's, as usual) hustlers' times were recorded, dolls were placed in the diva's lounge and hustlers were photographed with the CycloFemme Pledge to inspire women to ride!


And Here's a little clip of part of the hustle in action. Thanks to Aaron Chambers for providing it!

Posted by Berly Brown at 8:11 AM No comments:

This Saturday, we're looking to have some fun cheering on the tough women of roller derby. It's the No Coast Derby Girls home opener versus in-state rivals Omaha Rollergirls.

Join Sheclismo at Yia-Yia's at 6 PM for pizza & beer before we head over to Pershing. Derby Girl Christine "Silvia Bullet" says they're going for a black-out, so wear your Sheclismo t-shirt/hoodie and come out for some SHE-nanigans!
Posted by elisabeth at 10:08 AM No comments: