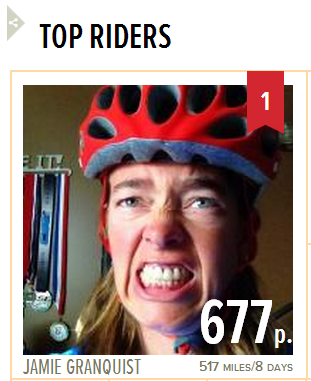 National Bike Challenge update:  Currently, four sheclismas have pedaled themselves into the top ten of the male-dominated local leaderboard.  Jamie sits atop the stack at #1 thanks to her domination of the 5 day, 500 mile challenge.  The indomitable sixth-placed Gina is climbing the ranking and now a mere 5 points from knocking RG from his 5th place spot.  Janine "always-take-the-long-route" C. is following Gina's wheel rather closely in #7, and Sydney rounds out the top 10 at #10.  Sarah Janiak holds 12th and Elisabeth sits at #17.

Sheclismo also got itself a new member...soon to be 8th grader AB, has gone ape over Endomondo's automatic tracking for her iPhone.  Her recent burst of cycling has helped Sheclismo move into 3rd place nationally in teams sized 25-40.  Additionally, she and her grandma are also busy earning points for Bennet, NE, which is now fifth in the state, and 233rd nationally.   Keep it up, SHECLISMAS!
Posted by SHECLISMO at 3:30 PM