Taking the Lane: Sharing is Caring!

My exercise adventures have stayed more bipedal than bi-pedaling this summer, so I wanted to take the opportunity to discuss sharing the road with cyclists from the point of view of a driver. I may not be riding much right now, but I’m sure as heck an advocate for those who do. A little knowledge goes a long way in staying safe on the roads.

Crosswalks-it’s illegal for cyclists to ride through a crosswalk. You’re probably thinking, “hey! Then how the heck do I get to the other side?”. Well, silly, I don’t mean riding ACROSS it, but in it. Trying to be clever and scooting over to the crosswalk to get through a light puts you in the flow of traffic, out, and then back in again. Getting in the flow of traffic as a cyclist is a scary thing for me, so I’m like the Griswold family stuck in the roundabout for hours once I get in there. I can’t imagine wanting to bounce in and out, but hey-turns out, it’s just a bad idea. Bonus pain points? You’re the one legally at fault if you got hit in the crosswalk. Talk about insult to injury!

Right is always right, right?-Unless you’re one of those crazy Europeans, you’re pretty used to traffic movement on the right side of the road. Most of the time, this applies to cyclists as well as cars. Any exceptions to the rule? Always! Stay as near as possible to the right side of the roadway unless:
--you’re passing another cyclist or vehicle
--you’re about to make a legal left turn
--you’re on the paved shoulder of a highway (and if you are, kudos to you. I’ve tried it a few times and just can’t shake that inherent death feeling).
--it’s reasonably necessary to avoid unsafe conditions (hey, look out for that giant pothole!)
--the lane you’re in is too narrow for both vehicle and bicycle to share (go ahead and hog that lane-it’s your right!)
--if you’re on a multilane one way street where the posted speed limit is less than 35, you may hop onto the European side of the road and ride away.

Keep your equipment maintained-sounds pretty obvious, right? But a night or two of being too lazy to charge back up your rear red light or front headlight can make for one surprisingly dangerous return home. The city of Lincoln requires a rear red light when riding at night. Always a good idea to make yourself as visible as possible, and when riding in dusk or dark conditions, you need all the help you can get. So throw on your loudest cycling kit, fire up those lights, and keep yourself safe.And may I suggest this rave-ready bike mod? 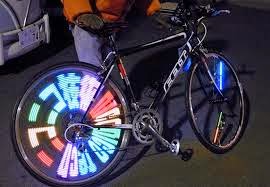 On your left! YOUR LEFT! ON YOUR LEFT!-This one deals more with sharing the road with pedestrians. I’ll admit that I’m on the bike path more as a runner than a cyclist these days, and my feelings on passing seem to be more in favor of whatever activity I’m doing. Yeah, I’m a hypocrite. But it’s courteous to announce your presence with the ring of a bell, a polite “passing on  your left”, or tire tracks across their back. OK, maybe not that third, but sometimes it sure feels that way! As a runner, I can tell you that even if the yell startles me, I still prefer to know that you’re there instead of just zooming past me. But, pedestrians, you’re not off the hook. If you’re in a group, and you get the signal, don’t startle, don’t stand your ground, move over. It’s super frustrating to have to slow down, or even stop, because a gabbing group of people can’t hear your repeated cries for your rightful space on the path.

Play nice!-The simplest rule seems to be the hardest one to follow. I know we all got taught to share in preschool, but those days are far in the rearview mirror and need a reminder every once in a while. The road is a big place. There’s room for cyclists and drivers, I promise. 3 feet needs to be maintained by the driver as the space allowed a cyclist. I have seen both sides of that fence-I’ve been on my bike and had drivers disregard my personal space so bad this weeble wobbled but luckily didn’t fall down, though there was definitely a strong wind trying to knock me over! I’ve also been the driver, and had a situation where there’s oncoming traffic, the lane is narrow, and I’m just struggling to give the cyclist the space they deserve. 99% of the time, there’s no excuse not to give the cyclist all the room they need.

Posted by llkastens at 7:00 AM