Taking the Lane: Riding Your Bliss

Albert Einstein is quoted as saying “The theory of relativity- I thought of that while riding my bike.” I can no more speak for all cyclists than a yogi can for all that practice yoga, or a runner for all runners. What I find is that the stress and annoyances of work or life unspool with my thoughts, left by the side of the road, and my mind is clearer, when I'm completely immersed in an activity that unites mind, body, and environment. That is, riding my bike. There is something about keeping the rest of your body and awareness occupied that allows the mind to empty and relax. Time seems to disappear or can't be accounted for. There is only the crunch of gravel, the quiet velvet of dirt, the light hum of pavement. I can hear the call of the meadowlark. I hear the crickets trying to tell me the temperature, the frogs, (or cicadas in their turn) trying to outdo each other in decibel levels. There's the bark of the watchful dog. Is it friendly? 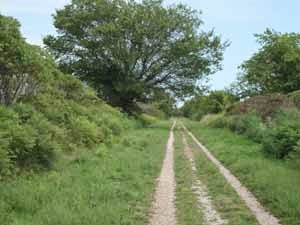 Some people like to listen to music while riding, and if you do, be careful, as using both earbuds can be dangerous. I like music as much as the next person, but I don't listen to it while riding. I don't need to, though the occasional earworm gets stuck going around in my head. Still, I am never bored. I visit deep roads carved through far-flung corners of countryside there would be no other reason to discover except by bicycle. I see rosy golden sunsets sending violet stripes of shadow across the road. Mulberries may color my path purple. Soon, I will be dodging black walnuts. The Sumac will turn scarlet, the leaves will fall. I'll see where the frost is burned away, leaving behind strange shapes in shadow. I see soaring hawks, curious foxes, herds of deer, huge animal dens in creek banks and unidentifiable carcasses as well as forgotten junkyards. I smell fields of freshly cut alfalfa, wild plum in bloom, hog farms and that unidentifiable carcass again. I am completely in my environment

You are also much more aware of the weather when you are dependent on it. I try to always carry rain gear, because you just never know. Is that mass of dark clouds coming my way? Is the wind shifting direction and getting stronger? I will need to leave earlier for my commute into a headwind. I'll get to that appointment in record time with that 35 mph tailwind. Cool currents of air are alternating with warm currents, like a river. The storm clouds went by, the sun came out.

Walking is nice, but covers a very limited area in the time available, and lacks the same intensity. Car travel largely separates you from your environment; a flash and it's gone. When riding my bike I'm moving under my own power. I breath in and out. My legs go around. My muscles work. My mind is free. 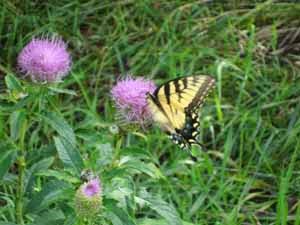 A ride can be pure fun and relaxation. It can be your commute through town, thermos of coffee in your bottle cage. Or you may have the irresistible urge to dig deep and bring up undiscovered reserves of strength and endurance you didn't know you had in an adrenaline fueled full-out race to the finish. I was unaware that I had a competitive bone in my body until participating in the National Bike Challenge last year. I had enjoyed commuting by bike for years and enjoyed the occasional trail ride, but never knew of a bicycle community until then, or what it offered. Being part of a larger community of people riding bicycles has shown me yet again that when people band together greater awareness is created and a community's well being can change for the better. Recently I was talking to a student transplant to Lincoln from Georgia. She was amazed at the trail system we have here in Lincoln. Sometimes we don't realize the riches we have right at our shifter levers aren't available everywhere until it's pointed out to us. I relish being able to bicycle commute and ride for fun on our wonderful trail system and surrounding gravel roads.

I also am happy to put my thumb in the eye of Big Oil, as I hardly need to drive, as well as Big Pharma and the health care industry in general, as I barely need their services.

I think one of the biggest obstacles to people riding more is that they don't realize that they can often use a bicycle as part of their daily routine, as well as a source of recreation, and that they'd like it. It may not even take much longer. In parts of Holland and Denmark bicycles outnumber cars as people go about their daily business. We can dream of that here, can't we?

You breath in and out. Your legs go around. Your muscles work. Your mind is freer.

As they say, the revolution will not be motorized.